The World’s Wonder View Tower, also known as the Genoa Tower Museum, was constructed in 1926.  The tower occupies a site on Genoa Hill in Lincoln County, Colorado at an elevation of 5,600 feet above sea level.  With the top of the tower at an elevation of 5,751 feet above sea level, at the time of construction, the upper deck of the tower reached the highest elevation point between New York and Denver as confirmed by the US Geological Survey.  From this vantage point, on a clear day one could view six states: Colorado, New Mexico, Kansas, Nebraska, Wyoming, and South Dakota.  The extent of this vista was noted in Ripley’s Believe It or Not column in 1933.

The original 1926 construction included the tower with a single-story room to either side.  Additional structures were gradually added to the site and ultimately connected in 1968 to form one building.  These structures included a gas station, trading post, café, and a small lodging facility.  This complex provided a resting point for travelers along Highway 24.  During World War II, the facility was open 24 hours a day, providing a rest stop for soldiers being bussed cross-country.  Following construction of Interstate 70 and the end of rail passenger traffic past the site in the 1970s, visitation to the tower declined.  The tower was closed to the public in 2013.  In 2017, the tower was added to Colorado Preservation Inc.’s list of Most Endangered Places.

I recently had the opportunity to tour the facility with Colorado Preservation, Inc. and the new owners of the building.  The building is quite unique in form, having been constructed in multiple phases with sections of wood framing, concrete, and masonry.  The masonry walls feature large rocks and petrified wood set in mortar.  The owners of the building shared that the concrete roof reinforcement is accomplished with bed springs, lawn mower parts, and other miscellaneous metals.  Inside the café, the rock walls feature paintings by Princess Ravenwing, a Sioux Tribe artist.  A theatre area of the building includes a stage as well as an audience area with additional paintings.  A wide variety of detritus remains in the building from its era as a museum, including a large collection of glass bottles, books, and rocks.

Form+Works Design Group is looking forward to working with Colorado Preservation, Inc. and the new owners of the building to update an Historic Structure Assessment previously completed in 2000 and to develop a rehabilitation plan for the building to ensure its preservation for future generations. 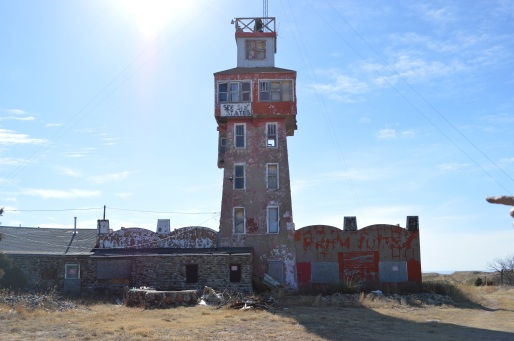 Stairs Down From Tower